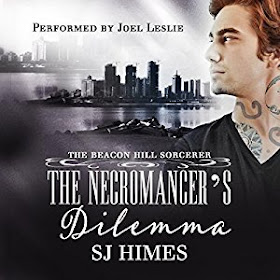 Even love can die without trust.

Angel’s brother, Isaac, has returned home, and the pair begin to make slow and awkward attempts back to each other. Learning how to be a brother to a grown man instead of a parental figure has Angel adjusting his behaviors and habits, and Isaac still remains a mystery. Was it merely entering adulthood that turned Isaac away from an overprotective Angel, or does Isaac carry a secret that will keep them from finally being a real family?

Daniel Macavoy, Angel’s new apprentice, is torn between his bond with Angel and the grasping machinations of his father. Dealing with a traumatized apprentice with dangerous holes in his magical education, saving Daniel may be harder than Angel first thought—especially since the biggest problem is not revenge, but guilt.

The one shining beacon in his life is Simeon, Elder vampire of Boston’s only Bloodclan. Four hundred years old and sexy as sin, Simeon is warrior and sage, patient and cunning. The strength Angel draws from Simeon’s devotion and the newborn mate-bond between them is steadfast and true…and the fount of death magic that animates the undead lord places Angel in the midst of a power struggle for control over himself, his lover, and his family.

Through it all, Angel is beleaguered by the unwanted attention of a troll-hybrid, the adventures of a dragon in the city, and a serial killer has decided to hunt the back alleys and midnight streets of Boston.

I must say that this is fast becoming a favorite, showcasing a top notch urban fantasy that boasts sorcerers, vampires, trolls, fae lords, and last but not least, a squee worthy, small, but spunky dragon. This continues to play on my nostalgia for when I gobbled up series like Sookie Stackhouse, Anita Blake, and Mercy Thompson. If you liked those stories, I don’t think you’ll have any complaint about this at all.

Basically, this is the continuation of the life and times of Angel, new mate to elder vampire Simeon. Their bond is a bit tenuous, slowly evolving and gaining strength, not quite permanent and solidified. Such a bond between a necromancer and a vampire has never been formed, and it’s sure to have unknown repercussions and consequences. As Angel and Simeon deal with their amazing new abilities that definitely increase their status, such developments also set them up as targets for all sorts of unwanted attention. It doesn’t help when their lives and powers are further tested as humans, and supernatural alike, start showing up brutally and ritualistically murdered, suggesting a threat with evil, dark intent. Of course, they’re the only ones capable and possibly powerful enough to address such a formidable foe.

What I enjoyed the most was the additional world building, the exploration into Angel’s abilities, and don’t forget, the evolving relationships he has with not only Simeon, but also with his younger brother, Isaac, and his new apprentice from a rival clan, Daniel. This was full of magical action and adventure, with some really yummy claiming smex. No complaints here!

Again, like its predecessor, Necromancer’s Dance, this was narrated by Joel Leslie. I admit he is not my favorite narrator, as he brings very over the top interpretations and accents to all of the characters, inducing the occasional eye roll, brow raise, and wincing at his various dramatics. However, thankfully the powerful and engaging storytelling overshadows the negatives of the audio, and I eagerly look forward to the next book! SJ Himes can’t write fast enough!!

Thanks to the author/publisher for the audio in exchange for an honest review.